What a crazy past couple of days! So, for those of you who don’t know, Minzy finally updated her SNS after going MIA for weeks. 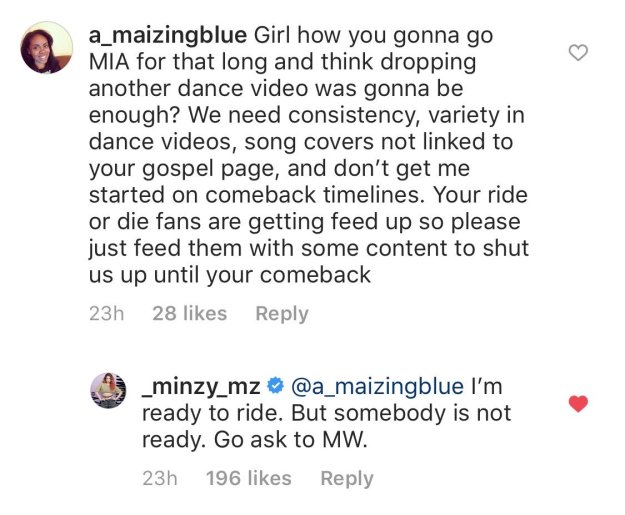 Some fans were not happy, and one in particular let that be known. Minzy did reply, and then ended up liking a comment that was a little more sympathetic.

In short, some fans showed Minzy some tough love, while others wanted to be a bit more understanding. The thing is, neither group is wrong. Perhaps both groups of fans are going about this the wrong way.

Minzy probably felt threatened by the fan who seemingly demanded answers from her. So it seemed that she, in turn, put up her defenses and put all responsibility on her company.

Now, if her company won’t let her release her music, then fine. It is a problem, and should be fixed. However, I think that should’ve been a post all its own.

As I understood it, what the fans REALLY wanted was communication. It’s not fair to go MIA and go on like there was no silence. (I’m not being critical. I’m just trying to put this into perspective.)

Yes, Minzy can use her social media in whatever way she wants. If she was working on her music, then she was also entitled to tell us (or not tell us) about it. At the same time, a small progress report (IG story post) could have sufficed. She was doing it a few weeks before she suddenly stopped. Either that, or nothing at all.

If something is wrong, we want to know. She shouldn’t be afraid to speak to fans. We’re invested in her, and we want to see Minzy soar in her career. She wouldn’t even have to go after her company. Just state that something is up, and it’s unfortunately out of her hands. Keep us updated! It’s not hard.

(I also wouldn’t be surprised if her company was the actual problem. For example, look at MYTEEN. Barely 2 years old, and one of their members left. Not to mention the two members on Produce X 101, and four that were on MIXNINE. For those of you who are unaware, a lot of small companies use shows like these to save their groups from disbanding. A last ditch effort, if you will.)

Let’s remember another thing: as much as we want to blame her and tell her to just get into the entertainment circuit, it’s not that easy. You have to have connections in the industry. Usually, that comes from the company. Now, there are a lot of celebrities who are able to make these connections on their own. There are also celebs that also depend on their companies to make said connections for various reasons. (For example, their company could be a lot bigger in name.)

This doesn’t mean that she can’t use her music connections to get her some attention. She knows a bunch of other artists that she could work with (Jay, Ailee, IU, Luna, and Hyoyeon, for example. Minzy mentioned working with Somi, and Taeyeon spoke about wanting to work with her.)

Truthfully, I’m also a bit worried that Minzy is still holding on to the mentality of her old company. (Taking years to complete material in the name of perfection. That worked back then in a big company. Now, however, you have to keep releasing content to stay relevant. That’s not to say she should just release WHATEVER she records, but I’m sure she’s got more than enough bangers in her repertoire that she might be underestimating in terms of musical value.)

Now seems like a good time to make a decision on where she wants to go with her career. This decision should also be made after careful consideration and hours of research. (I’m not gonna lie, when she joined her current company, I thought it was a bit rushed. Then again, I could be wrong. Perhaps she did her research and just didn’t see this coming.) I want her to look into the company she plans on joining and to make sure she knows what they can do for her, regardless of the “atmosphere” she gets from it. (I’m not saying she should get into a company where everyone is just business. However, I don’t want her to get into one just because everyone is nice and feels like family. A family atmosphere doesn’t mean anything if the officials at the company don’t care to further your career. Just because you get along with your label mates, doesn’t mean that your livelihood should suffer as a result.)

Furthermore, if she wants the success I know she does, she needs consistency. You know what she did back in 2017? We need a repeat of that. Multiple releases (not just minis/albums, but singles too), music shows, variety, photo shoots, festivals, OSTs, you name it. Even though there are not a lot of solo artists in K-Pop (compared to the groups), you can’t deny that the ones getting exposure would be stiff competition. (Then again, we’re not competing against them. It’s all about besting yourself.) If she wants to get that type of attention, she has to follow their example, all while staying true to herself and her musical vision. She can’t be afraid to put herself out there.

(I therefor applaud her decision to bring us more content via more dance videos, song covers, and vlogging. If Minzy comes through with this, and often, she could actually end up gaining more of an audience.)

She also needs to not put the cart in front of the horse. Build your local audience. I’m glad she knows her international audience exists. However, it’s her local audience that keeps her afloat. We can only do so much. The North American Tour seemed like a good idea at the time. Looking back, I think we all figured that she would release an album, promote it in her homeland, and then go on tour. So if she thinks of rescheduling this tour, I need her to do that. So many acts in K-Pop make sure to build up their name and fan base before even THINKING of going on tour. This means shedding her image as a 2NE1 member. I think it’s sad that out of all the members of 2NE1, it seems that Minzy was never able to be seen as her own person, outside of the group. This is where my above point of consistency comes in. The more people see you outside the group that made you big, the less they associate you with it. They then see you as artist in your own right.

If Minzy also just wants to put out music, we have to accept that too. Not everyone has it in them to do everything that comes with being an idol. This is probably where going indie/creating her own agency comes in. Music released under any circumstance is better than no music at all. As long as she releases music and performs on stage, I’m actually OK with that.

To the fans who came to Minzy’s defense, make sure to exercise caution when you do. Make sure you’re not coddling, or making excuses. Minzy is a grown up, and can make her own decisions regarding her life. It’s dangerous when you start to coddle your idols. They, in turn, don’t care to take responsibility for their part of the situation.

Could these things have been said with more tact? Yes. However, what’s done is done. At the end of the day, don’t we all just want the same thing for our baby girl? Don’t we all want to see Minzy not only succeed, but thrive? Minzy has to ultimately remember that her destiny is in her hands, and that she has the ability to change it, should she choose to do so.

At the end of the day, I want Minzy to define what success means to her, and go on to achieve this. She needs to know that all of her fans (nice or not) have her best interests at heart. We’ve seen her go through too much to watch her suffer in silence.